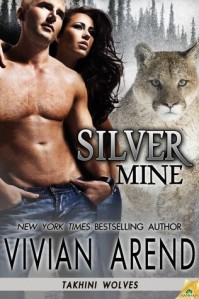 This is a copy I got from the author for review.

Life in isolation is the safest place for Chase Johnson, a crossbreed who doesn’t know which form he’ll assume next—cougar or wolf. Once a year, his unelected position as spokesman for the Yukon outcasts forces him to visit civilization. This time he runs across someone unexpected. She’s not his mate, but she pushes all the right buttons.

It’s taken years for Shelley Bradley to gather the courage to return to her home pack. In spite of being the lowest of the low—a shifter who can’t shift—she’s determined to make a place for herself as the Whitehorse locals’ new vet-slash-doctor.

There’s definite electricity between her and Chase, but sex with fellow shifters and the inherent mind games got old a long time ago. Ignoring him seems best. When he shows up at her office with a wound that won’t heal, she’s stuck—yet drawn to solve this medical mystery.

As they journey deep into outcast territory in search of answers, their powerful sexual attraction crumbles her resistance. But time is of the essence. If a cure can’t be found before his human and cougar succumb to his injury, he—and others like him—will die.

Yet Another great series from Vivian Arend.  This is book 2 in the Takhini Wolves series. I have to admit up front I’ve loved everything I’ve read from this author. This is a great Paranormal Romance that is for adults.  The sex scenes are steamy and well done, but there is plenty of action.  The story is well developed.

Chase is a loner and he’s convinced he likes it that way because he never knows if he’ll shift into a cat or wolf, then he gets hurt and can’t heal. He runs into Shelley at her clinic and suddenly alone doesn’t sound so good. Of course he thinks he just wants a fling.  I like Chase’s confidence in his abilities, quiet strength and the way he takes care of everyone in his life while denying he does it at the same time.   I did wish he didn’t doubt that he was worthy of anything other than being an outcast due to his duel nature and lack of a certain control.

Shelley has cruelty in her past that she has to overlook so that she can connect with another shifter.  She holds pieces of herself away from everyone.  She’s convinced herself that she’ll be alone forever and is fine with it.  Then Chase shows up in down and makes her doubt her outlook for the future.  Shelley also fights herself for what she wants. I could understand Shelley’s pain at past and potential future rejection and her desire to be with the sister that loves and supports her regardless of anything else.

I loved the characters, especially Chase, they felt real with developed personalities.  The side characters were well developed with complex personalities.  I want to know more about a few of them. The Yukon came to life for me.  At times I felt the cold and the beauty of the place come through very well.

I laughed out loud, got annoyed at some characters, and felt the emotional pain of others. In other words Ms. Arend brought the story to life.

This can be read as a stand-alone, but would be much more enjoyable if you start with the first book in the series… Black Gold.

Pre-order Silver Mine at Amazon