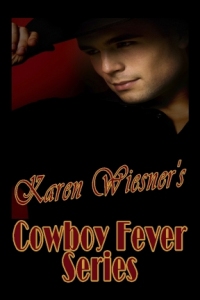 Wings of Love (Cowboy Fever #1) by Karen Wiesner
Publisher: Whiskey Creek Press
Review Source: Author
Release Date: September 15, 2011
My Rating: 4/5
When Wings “Mac” Mackenzie falls in love, it’s for life, and interior designer Amanda Grant is the woman he has his heart set on. When he asked her to move in with him at his fixer-upper ranch in Fever, Texas–the dinky little cattle town he and his brother grew up in—he’d expected to be there with her often. Unfortunately, as co-owner of a family-owned engineering firm, Mac finds himself spending more time than ever overseeing projects after his younger brother becomes a family man. With Amanda making the house a home for them, he struggles to get his business matters in hand so he can settle down with her, the way he longs to. An on-the-job injury puts his life in perspective. Eager to become a full-time rancher, he returns home at Christmas-time, ready to make the ultimate commitment to Amanda–only to find her long gone

This is a very sweet story of love and the fear to love.  The journey that Amanda and Wings take to come to terms with their pasts comes through well. I felt their conflicting emotions and confusion on how to interpret each others words.  There were times I want to strangle one or the other of them for their shear blindness to the obvious.  I do understand past hurts hang around way longer than they are welcome, but it didn’t stop me from wishing these two would just get over it;)  I was surprised that I got to know the main characters so well and got as invested as I did in the outcome for the length of the story.

Amanda has picked the wrong men all her life. She has wasted time on guys who are after her for one thing or another and then leaves when they don’t get it. It has left Amanda feeling as if she’s not worthy of love. Then along comes Wings and yet again she falls hard and fast, in 6 days fast. Due to her past she’s left confused and feeling like the fool yet again when he leaves on business and treats her differently.  He becomes cold and distant when he calls, so after three months of this she packs and goes
home.  This time hurts more than ever before.  Will he come after her or not care at all?

Wings is a man who has learned that women don’t want to be smothered, their careers come first.  The idiot women he’s dated in the past have left the minute he mentioned commitment, claiming they didn’t want to be tied down to family their careers came first.  He’s learned his lesson well.  After getting Amanda to his ranch to decorate it, as a way to get closer to her, he gets called out of state on business.  The problems start right away with Wings not wanting to “scare” her off by getting too serious too soon.

I recommend this to anyone of all ages who like cowboys and sweet love.

This is available now in Christmas Gems, A Jewels Of The Quill Christmas Anthology

Read our Mission. Find out how you can help us adopt James.