The book will be free June 1-3  at http://www.amazon.com/Single-Witch-Vehicle-Vampires-ebook/dp/B009GN9C06

Anwyn Rose is descended from a long line of powerful witches yet she can barely cast spells young witchlings have mastered. She has one functioning witch gift, the power of knowing, which she puts to good use as a Detective on Flint’s Preternatural Investigation Team.

It’s a new era in Vehicle City, supernaturals are running the town.

The P.I.T has their hands full with paranormal crimes. Top priority is a serial killer, who appears to be a vampire, draining young women in the city.

Anwyn is on the case with her sexy partner Detective Mike Malone. Complicating things is her relationship Galen, a vampire who looks more guilty than innocent, although Anwyn trusts her instincts even if her power is on the fritz.

Mysterious spells, compromising situations, and a possible demon on the loose make it hard to focus on the case, but Anwyn has to make things right before the human police execute the wrong vampire.

Hex and the Single Witch contains magick, a little bit of mystery, a lot of supernatural mayhem, and a sexy love triangle that will leave you wanting more.

“You should have told me why you hate vampires so much. It was during the Hysteria wasn’t it?” The damn Hysteria ruined and destroyed so many lives all thanks to a bunch of power hungry vampires and Others who thought it was a good idea to let humans know they existed. Like the witch hunts, the burning times from before hadn’t proven that was a bad idea. But, no, they thought a new, modern generation of humans could handle it.

The Hysteria proved humans hadn’t evolved much. Of course, neither had the Others.

“Yeah,” he said into his hands.

“You know I lost my dad to vampires at the end. At the last battle. The rogues had the humans all riled up. No one knew what was going on, the riot started and there was this group of mercenaries, humans killing anything that moved. My dad’s team tried to get them out of there, but as soon as they realized vampires and Others were on the police squad the mercenaries decided to wipe everyone out. My dad was shot and while he was down rogue vampires finished him off.”

“Then how can you still be close to them?” Mike sneered.

“Humans played their part in his death too, Mike. Can I shut myself off from the world and hate everyone? It’s unrealistic. I understand your hate, but they are not all bad.”

“They all drink blood. They are monsters designed to kill humans.” His snarl looked ferocious.

I had not realized his hate ran so deep.

“And humans are designed to kill animals and each other. Doesn’t mean we all do.” Stubborn man.

“Anwyn, I’m sorry I can’t look at them the way you do.” He glanced at me then stared at the floor.

I touched his face gently and made him look at me. “Mike you can’t carry pain and anger around with you forever. Believe me, I know. I dragged it around with me for a long time. I lost both my dad and my mom that night. Even though my mom still lives and breathes, she’s not the same. But I can’t change it, and I can’t hate everyone for it. I just have to accept it. I took this job to try and prevent other kids from growing up with this pain and anger. Isn’t that why you took this job too? You know we have to fight the bad guys and take help from all the good guys we can, right?”

I caressed his strong jaw. Goddess, he was a beautiful man. And more complex and tender than I had thought. I took off his top hat and laid it on the desk so I could run my fingers through his wild wavy hair. The move startled Mike and he looked at me with a puzzled expression on his face for a moment before heat flared in his eyes.

As soon as I saw the flames in his eyes my body responded. A burning need rose inside me, an ache suddenly needed to be filled. 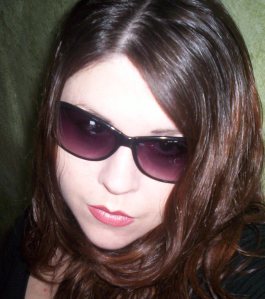 When not fulfilling one the many roles being a wife and mother of three require, Roxanne’s world revolves around words…reading them, writing them, editing them, and talking about them. In addition to writing her own stories she loves to read, promote and review what others write.

Roxanne is the owner of Bewitching Book Tours and operates Fang-tastic Books, a book blog dedicated to paranormal and urban fantasy books.

When not reading, writing, or promoting Roxanne loves to hang out with her family, craft, garden and search for unique vintage finds.

Roxanne can also be found on Linked In, Goodreads and Google+