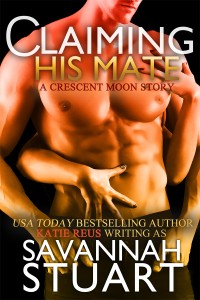 She thought the house was empty when she broke in…

When jaguar shifter Lauren Hayes breaks into an alpha’s home to steal back what rightfully belongs to her pride, she doesn’t expect to be tackled by Max McCray, second-in-command of the Kincaid wolf pack. As punishment for her crime the sexy wolf shifter demands that she stay with him for one week. Knowing she’ll start a war between her pride and his pack if she doesn’t, she has no other choice but to agree, even if the thought of being near him 24/7 makes her scared that she won’t be able to hide her growing attraction to him.

Now he has a week to make her his…

Max has waited months to make a move on the sexy jaguar shifter and now that she’s broken shifter rules, he’s not letting her go. He doesn’t care that he’s a wolf and she’s a jaguar, claiming her forever is the only thing that matters. Unfortunately, not everyone likes the idea of him being with a feline shifter. Max is forced to choose sides between Lauren and members of the pack he’s sworn allegiance to in order to protect the woman he knows is his destined mate.

The action starts off with the first sentence and doesn’t stop. By the end of the first chapter I knew a lot about Lauren and had met and started to fall in love with Max. He could “punish” me anytime. 😉

This is a fast, fun, and steamy read. There’s a lot packed into this short story. The characters are three dimensional and deep. The story is fast paced but flows nicely.

Lauren is a strong and confident woman, but she doesn’t think there can be anything lasting with Max. How can a Jaguar and Wolf have anything permanent? Max has to convince her it’s possible. He is such a hot alpha that can be loving and tender.

If you’re looking for action, steamy romance and hot shifters I highly recommend this one. I was very lucky to get a copy of the book in exchange for my honest review.

Claiming His Mate on Amazon