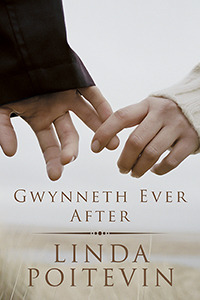 Gwyn Jacobs doesn’t believe in fairy tales. Ever since her ex-husband walked out, leaving her alone with three small children, Gwyn has been mother, father, and bread-winner all rolled into one. Her own scarred heart aside, she refuses to open up her children’s lives to the possibility of heartbreak, and so she has an unbending policy of no dating and no unattached men in their lives.

Until her very own fairy tale falls into her lap…and the hero won’t take no for an answer.

This was a wonderful read for me. It was a great break from angst, danger, mystery or anything else other than slow sweet love. Don’t misunderstand there were issues to deal with, but they were handled without over the top drama. It slowly builds from beginning to end.

Gwyn is raising three children on her own and is a very strong woman that has been badly hurt and betrayed. I really liked the fact that she didn’t fall for Gareth right away. I mean she knew who he was, who didn’t? She put her children first in all things, even over herself. As a mother I get that, but towards the end I wanted to scream at her to get over it and do something for herself. The fact that her ex left her, not to mention the way he did it had left a pretty big scar on Gwyn’s heart. When she finally lets someone in he unavoidably causes her pain and she pushes Gareth away and tells him it’s over.

Gareth is in town for a reason no one can know, and he sure didn’t expect to fall for anyone. That was before he sat next to “Gwynneth with 2 ns” during a local play. He was let into her life slowly and he wasn’t leaving. He had to fight Gwyn’s reluctance at almost every step, but he did. After he realized he had found the love of his life, it all gets away from him. The reason he’s in town becomes known. On the evening news no less, and Gwyn feels betrayed and lied to.  Gareth fights, begs, and anything else he can think of to get Gwyn to let him back in, but despite knowing the truth and why he couldn’t tell her she of course says no. Gareth, not knowing what else to do gives in and books a flight to leave town. Of course that isn’t the end of the book, but I will not spoil that for you.

I loved this amazingly sweet love story, especially the fact that it took it’s time to build up to the conclusion. They got to know each other and Gareth came to know Gwyn’s fears and insecurities enough that he could mostly work around them. Don’t get me wrong the attraction between them was obvious and intense from the beginning, but they took it slow. I felt for Gwyn as she faced and worked through her excruciating fear of the pain of loss and living through it again.

This is a stand-alone, no cliffhanger! I wouldn’t mind more of Gwyn and Gareth though.

Gwynneth Ever After on Amazon