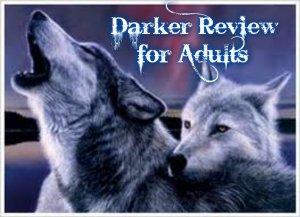 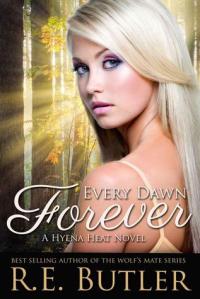 When Orion and his were-hyena clan rescue a she-wolf hiding in a bus station bathroom, they had no idea that they would be staring into the tear-filled eyes of their mate. They’ll do anything to keep her safe and make her theirs forever, even if it means keeping her at arms’ length.

Sydney Nichols never believed she would know what freedom felt like until she found a way to escape her abusive mate. But before she escaped, her mate did something to her, and she’s unable to hide the effects of his tampering when the group is stranded overnight during a storm. When the truth comes out, will they forgive her and embrace their future, or will she lose the only good thing she’s ever had?

I really liked this story. What I liked about it most, I think, was the fact that even though the heroine is in danger it resolved with a lot of story left over. The ending is not rushed, feels natural and is believable. This is the second book in the series, but can be read as a stand-alone.

Sydney is one of the strongest heroines I’ve read in a while. She has so much to deal with, yet does with courage and an eye to the future. Sydney is sold to be mated by her very neglectful mother when she’s only 18. Her new “mate” abuses her in every way for years. The one act of kindness shown to her is when she is given the means for escape. Before she runs her abusive mate does something that makes the night very hard on her and very interesting for her and her rescuers.

I just loved Orion, Crux, and Sterling. Not only have they found their mate, but they have to deal with her being a survivor of terrible abuse. Of course they help her through what was done to her on the night of her escape, but after that they back off and try to let her lead. What they don’t know is she’s waiting for them to make the first move. This causes a bit more hurt to Sydney, but it is straightened out shortly. The men’s personalities came out clearly, their different characteristics were apparent and they had depth.

The sex was oh so HOT and plentiful, but didn’t feel repetitive. Butler handled the ménage scenes very well. I would recommend this to those looking for an extended happily ever after with lots of steamy action and tender caring Heroes who happen to turn furry every now and then. This will probably be a book I will re-read.

Every Dawn Forever on Amazon

Where Fantasy and Romance collide

Read our Mission. Find out how you can help us adopt James.