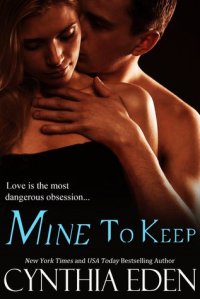 Love is the most dangerous obsession…

Skye Sullivan is trying to put the pieces of her life back together. She survived a brutal stalker and escaped his abduction, and now she is looking to the future—a future that includes Skye’s lover, billionaire Trace Weston. Skye thinks the danger is finally over for her.

When Trace’s past comes back to haunt him, Skye discovers that the man she loves isn’t quite who he seems to be. Trace has been leading a double-life. An ex-special forces agent, his military training turned him into the perfect killing machine. He made more than his share of enemies during his time in the military—and as he built his security empire—and one of those enemies is striking back.

He won’t lose her.

Skye is the one weapon that can be used against Trace—his only vulnerability. But he won’t let her go—he can’t. Trace will do anything necessary to protect Skye. Anything. Yet when she discovers the secrets that he’s tried to keep hidden, Skye’s pain and rage may send her running directly into the cross-hairs of a killer…

Author’s Note: MINE TO KEEP is a sexy romantic suspense novel. It contains violence, strong language, and hot adult situations. Please consider yourself warned. Thank you.

This is the second book in the Mine series and the conclusion to the first Mine To Take. I will mention that the first does not end in a cliff hanger; it ends in a nice spot.  Mine To Keep picks up 4 weeks after the end of Mine To Take. These must be read in order, so I’ll try not to rehash book one or spoil this one.

I was glad to get more of Skye and Trace’s story. This one is a mystery full of angst. Skye is dealing with the aftermath of her abduction including nightmares and Trace’s need to protect her. She is a strong woman to have dealt with all that she has in her life. Finally Skye has the only thing she’s ever wanted, Trace, but now they have to figure out who is out to destroy him by killing her. We see a lot more of Skye’s strength and determination.

Trace is just as alpha and hot in this story. We get to know him so much more and what he’s been through during the 10 years he was away from Skye. Trace has done some bad, dangerous, good, and painful things while in and out of the military. It’s a mission from the past that comes back to haunt him and Skye. He has to eventually tell Skye the truth about his past if he’s going to protect and keep her. It’s after he opens up that their love really grows, if you thought it was intense in the first book you were wrong. I feel more for Trace than in the Mine To Take.

This has just about everything romance, HOT sex, angst, and mystery. I have to say that I figured it out sooner than I would’ve liked and that left me feeling as if it was drug out; but it was still a fantastic “who done it” to solve. Noah is also introduced and I can’t for his story.

Mine To Keep on Amazon

One thought on “ARC Review: Mine To Keep”