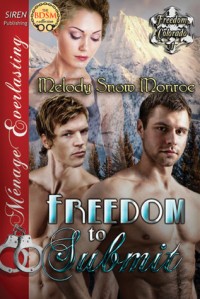 Smart, curvy, surveillance expert Danisa Milan captures a killer’s crime on video. When he threatens her life, her high school dream man, Sheriff Brady Braxson, insists she move in with him and his Dom rancher roommate, Lucas Holt. Maybe it’s the danger she’s in, but her desire explodes being around them, and she loses her heart to both. But are they only acting like they want her because she’s in their care, or do they want her to be their submissive for life?

Brady and Lucas find Dani perfect in every way, but they don’t want to overwhelm the ménage virgin. What can they do to convince her to be theirs forever?

When the killer is found dead, everyone thinks the danger is over. Then Danisa finds evidence someone else is behind the murder, and their lives tailspin. Can the men reach her in time before she’s killed, too?

This is a good beginning to a new series. It basically revolves around three college friends that start up a security/surveillance company. It is definitely for those 18 and over.

Dani has moved back home to the small town of Freedom for the business she and her friends have started. On a stakeout Dani sees a murder and catches the killer on camera. Unfortunately he also sees her and this is where the mystery of exactly who is trying to silence her. Brady walks into her life that night as he’s the sheriff. Dani is immediately reminded of the crush and fantasies she had of him in high school. When Brady suggests she moves in with him and his roommate Lucas so they can keep her safe she fights it for a few seconds; but who wouldn’t want to be keep safe? 😉

Brady is drawn to Dani and he wants to see what Lucas thinks of her. They’ve been looking the one they can share permanently. Lucas is more serious about a D/s relationship than Brady, not that Brady isn’t into the scene, he just wasn’t as strict a Dom as Lucas. I have to admit Dani slept with Lucas a bit too soon for me I’d have at least waited a day or two. The sex was hot and varied, sometimes just two and others all three. If you’re looking for a steamy erotic romance this is a good one to pick up.

The mystery of who the killer was seemed to be secondary, and a bit drawn out. I’m still not sure of the real motive behind the first murder; there was a lot speculation but no definitive answer. This is the only issue I had with the story. It’s well written, edited, and flows nicely. I’m hoping the following books in the series focus on Dani’s partners Nikki and Holly.

Freedom to Submit on Amazon