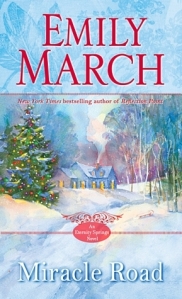 Perfect for fans of Robyn Carr and Debbie Macomber, New York Times bestselling author Emily March’s seventh book in the Eternity Springs series is a heartwarming story that celebrates the miracle and joy of love during the holidays.

After tragedy strikes his team, college basketball coach Lucca Romano arrives in the haven of Eternity Springs to reassess his life. Even a winning record and big offers can’t dent the wall of guilt that Lucca has built around himself. Nothing can—except maybe a vibrant new neighbor who won’t give up on him.

Schoolteacher Hope Montgomery believes in miracles. She has to believe—because giving up would mean crumbling under the greatest loss a parent can endure. Hope understands Lucca’s suffering; she lives it herself every day. However, the high school team needs his coaching expertise, so she sets out to draw him from his cold, solitary shell and into the warmth of life in their small Rocky Mountain town. But when a weak moment leads to consequences that shake Hope’s faith, it’s up to Lucca to put aside his heartache and show the teacher that here in Eternity Springs broken hearts can heal—just in time for Christmas.

WOW! What an emotionally gripping story. My favorite Eternity Springs novel hands down.  This is a very sweet romance from beginning to end. There was very little angst. It’s a well written and paced story that kept me up all night to finish it. I’m going to give you as much as I can without spoiling the story.

Hope is a kind, loving, tender and wounded woman. She has a big traumatic event from five years ago that she has to deal with in order to move forward. Hope will never get over this; she can learn to live with/through it. I admire her strength and tenacity. I haven’t read about a  stronger heroine in a while. When Hope first meets Lucca she thinks he’s one of the biggest jerks. Then she learns of his past and by just being there for him and being herself she helps him heal. It doesn’t hurt that she will tell him exactly what she thinks of him, his attitude and behavior.

Lucca’s life went off the rails about a year ago and he’s in Eternity Springs to help his mother with her B&B. Lucca shoulders the responsibility for the accident and lives with this burden on him every day. He has no intention of confronting his demons until Hope reads him the riot act one day and forces him to really look at himself. Lucca starts healing and is added in this as he helps Hope deal with her devastating loss. I fell a little bit in Love with Lucca. His character is very believable. He isn’t perfect and has flaws just like the rest of us.

Miracle Road is the seventh book in this series, but it can be read as a stand-alone. Characters from previous books are present throughout the book, but I didn’t feel like I’d missed anything. The earlier characters are brought into this story with just enough background that I felt as if I knew them; but it wasn’t so much that it felt repetitive . I plan on going back to read the books I haven’t read from the series.