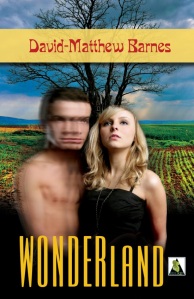 After her mother loses her battle to cancer, fifteen-year-old Destiny Moore moves from Chicago to Avalon Cove, a mysterious island in South Carolina. There, she starts a new life working part-time as a magician’s assistant and living with her eccentric uncle Fred and his hottie husband, Clark.

Destiny is soon befriended by two outcasts, Tasha Gordon and Topher McGentry. She accepts their invitation to accompany them to a place called Wonderland, a former boarding house owned by the enigmatic Adrianna Marveaux.

It’s there that Destiny meets and falls in love with Dominic, Tasha becomes enamored with Juliet, and Topher gives his heart to Pablo.

When Destiny uncovers the reason she and her friends have really been brought to Wonderland, she’s faced with the most crucial choice of her life.

An Excerpt from Wonderland by David-Matthew Barnes

A hand reached inside the tunnel. I almost screamed and clutched Topher’s arm, nearly crawling into his lap. Tasha kneeled down in the sand and poked her head inside.

“The coast is clear,” she said. She straightened her yellow headband and motioned for us to get out of the tunnel. I slid out first. Tasha offered a hand and helped me up. I wiped the back of my skirt, hoping I didn’t have sand stuck to the back of my thighs.

I’ll never wear a skirt again. At least not when I’m hanging out with these two.

“How’d you get rid of ‘em this time?” Topher asked.

“How do you think?” Tasha said. “I threatened to put a curse on them.”

She nodded. “Of course. They still think I’m a witch.”

Topher turned to me. “That reminds me,” he said. “Destiny, do you believe in magic?”

I gave them both a look. “Okay,” I said, a hand on my hip. “What’s the deal? Why does everyone keep asking me that?”

Tasha reached out and brushed a few strands of hair away from my eyes. “Because here,” she said, “you either believe in magic…or you don’t. Topher and I…we believe.”

“We need to know where you stand,” Topher echoed.

“Where I stand?” I repeated. “I’m standing on an island in South Carolina a thousand miles from home.”

Topher slid his arm around my waist. He whispered into my ear, “That life is behind you now.”

I started to cry, and felt like a complete idiot. “I know,” I said, with a small nod. “I can never go back.”

“We know what you’ve been through,” Tasha said. She took my hand and placed it in hers. Her skin was as soft  and velvety as it looked. “We know about pain.”

I looked around, worried people might be staring at three of us. The playground was empty. Except for the seagulls gliding in the air above.

My voice cracked when I spoke. “I miss my mom,” I admitted. It was the first time I’d said the words. Just saying them made me cry even harder.

Damn it. Stop crying. You’re such an idiot.

“She misses you, too,” Tasha said, tightening her grip on my hand.

“Because,” he said, “it brought you here to Avalon Cove.”

“To us,” Tasha added. “Everything happens for a reason.”

“You guys are being super sweet and I really appreciate that,” I said, “especially since you don’t even know me. I swear I’m not usually an emotional mess like this.”

“We want to take you somewhere,” Topher said.

“Okay,” I said. “But should I call my uncles first? Do either one of you have a cell phone I can borrow? I left mine in Chicago. I figured it was time for a fresh start. And a new phone.”

“I promised Sir Frederic the Great I’d have you home by nine,” Tasha reminded me. “And you will be.”

Tasha and Topher pulled away from me, stepping aside. They gave each other a strange look and started walking away, leaving the playground – and me– behind.

“I only have one question,” I said, once I caught up with them.

“You can ask us anything,” Topher said. “We have nothing to hide.”

“Where exactly are we going?” I asked.

Tasha smiled at me and said, “We’re taking you to Wonderland.” 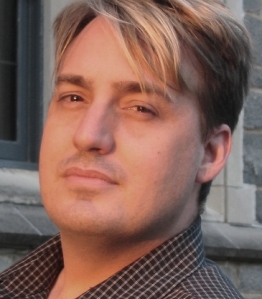 David-Matthew Barnes is a filmmaker, novelist, playwright, poet, and teacher.

He is the award-winning author of nine novels including the young adult novels Swimming to Chicago and Wonderland, which were nominated by the American Library Association for their annual Rainbow Books, a list of quality books with significant and authentic GLBTQ content for children and teens. His literary work has appeared in over one hundred publications including The Best Stage Scenes, The Comstock Review, and The Southeast Review. He was selected by Kent State University as the national winner of the Hart Crane Memorial Poetry Award. In addition, he’s received the Carrie McCray Literary Award, the Slam Boston Award for Best Play, and earned double awards for poetry and playwriting in the World AIDS Day Writing Contest.

Barnes is also the author of over forty stage plays that have been performed in three languages in eight countries. He is a member of the Dramatists Guild of America and International Thriller Writers.

Barnes’ first film was Frozen Stars, which he wrote and directed while still an undergrad in college. The coming-of-age independent film stars Lana Parrilla of ABC’s Once Upon a Time.

Barnes earned a Master of Fine Arts in creative writing at Queens University of Charlotte in North Carolina. He has taught college courses in writing and the arts for the last decade.

He lives in the city of Denver where he serves as the CEO of Fairground CineFilms.