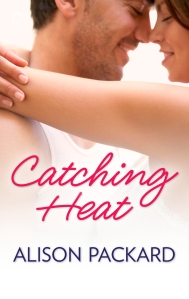 Life has taught Angie DeMarco that all baseball players are womanizers, and her incredible one-night stand with sexy San Francisco Blaze back-up catcher J.T. Sawyer seemed to prove it. Determined not to give in to their sizzling chemistry a second time, she’s kept her distance ever since, focusing on her accounting job with the team. But now she’s laid off…and pregnant.

J.T. was hurt by Angie’s rejection, but with one more year with the Blaze, he has no time for love. He needs to spend the off season training hard so he can negotiate a better contract with a new team at the end of the year. But when Angie shows up on his doorstep, he‘s overwhelmed by wanting to not just do right by her but pursue a relationship with her. Hoping for a second chance, he proposes.

Angie agrees to marry J.T. on one condition: the marriage will be purely a business arrangement. But as Angie spends time with him and his family, and J.T. neglects his training to spend time with her, what begins as a union in name only slowly grows into something more—something that looks a whole lot like love and friendship.

Just after nine, J.T. left Matt and Kelly at Kamu’s and headed back to his condo. Across the street, Blaze Field was dark, but the Blaze apparel and memorabilia shop outside the stadium was open and doing brisk business. He wasn’t surprised at the turnout, the fans were still reveling in the team’s World Series win—buying up anything that had World Series Champs emblazoned on it.

Although he’d reached the pinnacle of his sport, the victory was bittersweet. His playing time had been minimal and his only significant contribution had been a double in game six—the game that had clinched the Series. That double had scored the go-ahead run and for a few exhilarating hours he’d felt like he’d made a difference. Damn it. He wanted to feel that way all the time. More than anything he wanted to move beyond being a back-up to guys like Rick Taylor and Matt. The problem was, he’d mistakenly assumed his natural talent would be all he needed. Not true. Matt had opened his eyes to that.

After entering the lobby of his building, J.T. rode the elevator up to his floor. Although the condo was nice, he wouldn’t miss it. His house in Sacramento was a lot more spacious and had a big backyard, complete with a pool and hot tub. His older brother, Jake, owned a gym and had agreed to train him during the off season. Jake assured him he would put him through his paces and knowing his brother, there would be torture involved. That tub would come in handy to soak his sore muscles.

The moment he stepped out of the elevator he saw her. A flood of hot, rough sensations slid down his spine as she turned and those mesmerizing eyes of hers locked with his. His breath caught in his throat and he silently cursed himself for still being affected by her. It had been that way since the first moment he’d laid eyes on her and from the telltale thundering of his heart, not much had changed.

Quickly gathering his scattered wits, he strode toward the woman who, for the past couple of months, had been extremely successful at avoiding him—the woman who had shared his bed for one extraordinary night and was gone before sunrise.

J.T. wasn’t sure why she was standing at his door and didn’t speculate on the reasons as he approached her. Her arms were crossed over her chest, obstructing his view of the ring he still hadn’t seen but knew she’d started wearing a few weeks after their night together. His gut tightened. He shouldn’t care that she was engaged—they barely knew each other. It hit him then that he didn’t know much about her, yet he was intimately acquainted with almost every inch of her slender yet curvy body.

Halting in front of her, he didn’t say a word. Instead he let his gaze wander over her face. Her skin was porcelain smooth, her cheekbones high, and her mouth, with its slight upward tilt at the corners only hinted at the beautiful smile he’d coaxed out of her that night so many weeks ago. Her dark hair spilled around her shoulders in wavy corkscrew spirals that almost begged to be touched. It was soft. It ticked him off that he remembered not only that, but every single thing about the night they’d spent together.

“What are you doing here?” he asked, more harshly than he’d intended. A twinge of guilt hit him but he quickly got over it. They’d had a one night stand—end of story.

Angie loosened her arms from over her chest to push her hair back. Something she did quite frequently. “I—I need to talk to you.” She paused, bit her lower lip and continued, “It’s important. May I come inside? I don’t want to talk about it in the hall.”

“Why not?” He fished for his keys in the pocket of his jeans. “This should be interesting,” he muttered as he unlocked the door and hit the light switch by the door as he moved inside. “Sorry about the mess. I’m packing up to head home.” He waved a hand toward the boxes still strewn around the room. Some of them were packed and taped up, but a few were still waiting to be filled.

“When are you leaving?”

“Sunday morning.” He closed the door to find Angie standing with her back to him, surveying the disaster that was his living room. It was the perfect opportunity to check out her ass, showcased to perfection in the snug black pants she wore. When she turned, he forced his gaze upward to meet hers. She had the most beautiful eyes he’d ever seen—a startling blue that reminded him of the aquamarine gemstones that glittered in the necklace his mother wore on special occasions.

“Sacramento, right?” Angie fidgeted with the strap of her purse on her shoulder, then clasped her hands together in front of her. She seemed nervous. Why?

“Now that I’m here, I’m not quite sure how to say it.” She paused and took a deep breath before exhaling. Her face had turned pale and there were dark shadows underneath her eyes. Whatever she had to say seemed to be weighing heavily on her. But what could it be? Was she sorry for avoiding him for weeks? Was she sorry she’d gotten engaged? 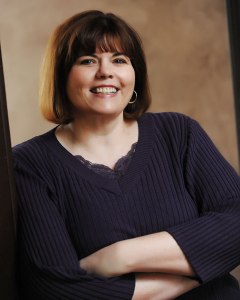 Originally from the San Francisco Bay Area, Alison now lives in Southern Nevada where she’s still getting used to the blistering summers and slot machines in every grocery store.

When not working at the day job that pays the bills, keeps a roof over her head, and supports her book and chocolate habits, she spends most of her free time writing. But when she takes a break, she enjoys reading, watching movies, and spending time with her family and friends.